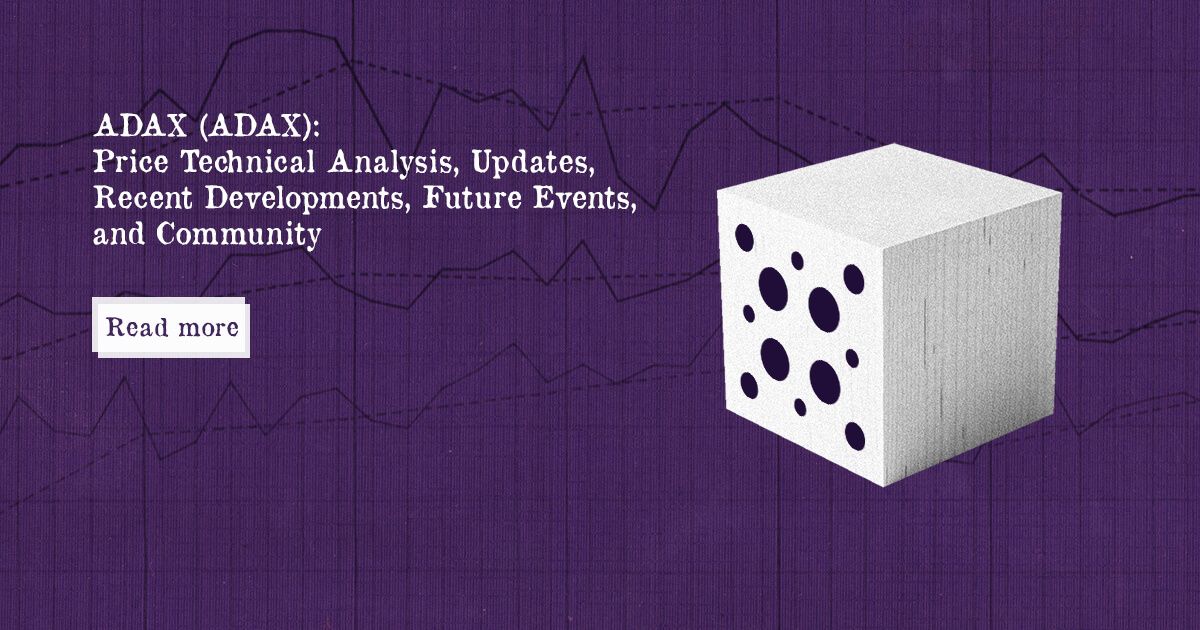 ADAX is an automated liquidity protocol that facilitates trades within the Cardano ecosystem. The completely decentralized and non-custodial protocol offers users untrammeled freedom to trade without censorship or the loss of control over their assets.

As a decentralized protocol, users will be able to maintain complete control of their tokens on ADAX. In addition, ADAX will operate on a ‘no order book’ model, which will eliminate intermediaries, complexity, and cumbersome trading procedures. All of that will be achieved once Cardano blockchain implements additional features that will allow the non-order book model.

ADAX has become famous for its massive gains. Since launching in August, ADAX has yielded a return on investment of up to 1,011%.

So, what has ADAX been up to recently?

The ADAX.pro team, in conjunction with CMO Dovydas P. and Lead Dev Architect Harold B, conducted an AMA session on a Telegram channel. The session, which falls into the project’s plan for community engagements, saw more than 500 questions asked in 5 minutes by the community members.

In addition, the development team outlined and explained what the future would hold for ADA. The official launch of the ADAX platform has now been confirmed to take place in Q4.

The AMA session held on September 29th provided some remarkable insights into the future of ADAX. According to the dev team behind ADAX AMM, smart contract functionality is undergoing a fine-tuning, along with other functionalities for the full launch.

The development team has set Q4 of 2021 as a realistic target for the complete launch of ADAX.pro. Before then, members of the community should expect new listings of the ADAX token.

The team also noted that ADAX.PRO is currently holding discussions with Kucoin on the possibility of listing ADAX tokens. Kucoin is planning to start supporting Cardano native tokens later in October 2021,which will make ADAX available to more investors.

Since its listing in August, ADAX (ADAX) has been one of the best-performing cryptos. Investors who bought ADAX at $0.26 in August would have an ROI of about 1,011%.

At the time of writing, the price of ADAX has been correcting, losing 6.7% of its value over the last 24 hours. ADAX is now trading at $0.9 with a market cap of $44.8 million, which makes it the 2,780th largest crypto project.

ADAX has a fantastic community that has only grown in 2021. ADAX recently celebrated 22k members on Telegram and has amassed over 39k on Twitter.

Members of the community are strong believers in the project. One user, @FlawlessFleece, wrote;

Anything is possible with this great community!

Building confidence with the slow and steady approach. ADAX is a winner long term and smart money is moving now.

The Dailycoin team discovered that members of the ADAX community are zealous about the project.

However, some members would rather have developments than price pumps and the dumps that follow. One user, @zixdaking, wrote on Twitter;

we love adax but we dont love pump and dumps

That's it guys. Let your investors know what's happening. Transparency is important. Don't let the impatient get-rich-quick fools get in your heads. You're doing great work and I'm sure you'll deliver a great product soon.

ADAX has carved out a unique niche for itself as a decentralized, non-custodial automated liquidity protocol on the Cardano network. At the complete launch of the ADAX.pro decentralized exchange, ADAX would not only be optimizing the potential of the Cardano Network but also setting a new trend for secure DeFi protocols.