ہوم Coins Altcoin News Axie Infinity: The Story of a Surging Gaming Token While All Others... 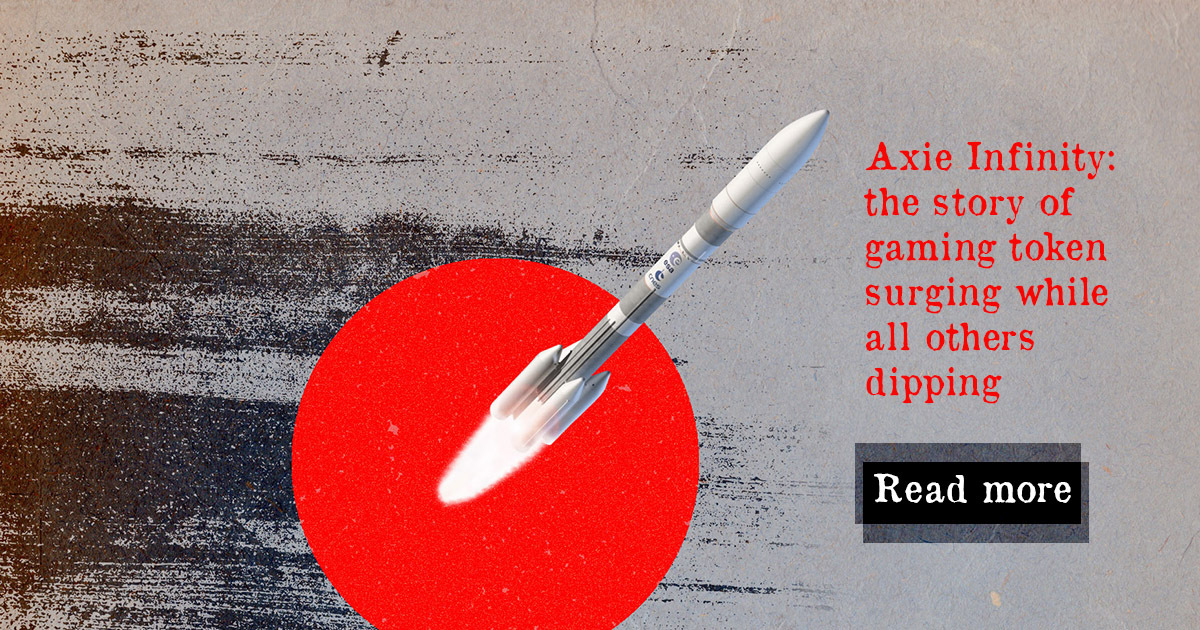 NFTs have exploded in popularity in 2021, with a single digital art piece by Beeple selling for $69 million. Non-fungibility of digital assets shifts the power of ownership from developers to the end-users. NFTs, regardless of the medium they’ve taken form in, have been widely discredited, however, they’ve provided a new means of retaining digital ownership. Axie Infinity, a play-to-earn blockchain game, is reshaping gaming through a “real in-game economy” that transcends anything seen before.

Blockchain has always been a libertarian technology. In gaming, the promise of digital ownership sidesteps the controlling methods of game developers. Yat Siu, non-executive chairman at Animoca Brands, highlighted that users recognize the importance of shifting towards the ownership economy as the digital movement becomes increasingly important. Furthermore, Siu, who invested in Sky Mavis, Axie Infinity’s parent company, envisioned that they could make money through blockchain games, while also distributing “unique assets.”

Axie Infinity introduced a new gaming model, different from the current meta of the freemium model, where companies generate revenue by selling in-game incentives. By contrast, the play-to-earn gaming model builds on the NFT infrastructure in which players can play, breed, battle, and trade Axies. Axie Infinity bears similarities to 2017’s CryptoKitties, but is established in a more interactive environment.

Axie Infinity is an Ethereum blockchain game which rewards its participants. Players can engage in PVP and adventure game modes to receive SLP tokens. AXS is the native governance token, while SLPs are required to breed Axies. In addition, the ecosystem fosters an interactive metaverse in which players can explore Lunacia, which is composed of multiple real estate plots, similar to the metaverse of Decentraland.

Reports indicate that metaverses built on NFTs add substance to the digital economy. Play To Earn released a video documenting a gaming community in the Philippines and their financial motivation to participate in the game. Some players would make more money playing the game than doing their day jobs. Additionally, Axie’s gaming model offers previously unheard-of possibilities for those heavily impacted by Covid.

The financial resources gained from Axie are not Fiat currency, but as stated by a player, they would transact AXS tokens to ETH, and the ETH to hard cash. While Axie Infinity has a high entry barrier, early adopters are greatly benefiting from entering the game as the price of AXS has since surged by over 700% to a high of over $29.

New technologies bring added speculation. Transcendence into the digital world is inevitable, and platforms like Axie and Decentraland develop digital lands, which tech fanatics have been exploiting. In a tweet, Kieran Warwick spoke of how he flipped land bought in Axie’s virtual world from $300 to $28,000. This behavior is similar across all platforms which have a digital marketplace for virtual land. Metaverse participants are using their existing purchases to rent out advertising space.

While the underpinning gameplay is yet unknown, Axie’s unicity is worth speculation, if not simply  making you a better player. In November, an Axie was sold for 300 ETH, which is worth roughly $130,000. What’s more is that the same specimen was relisted at a higher value of $250,000.

Are NFTs Finally Showing Their Value?

With the current price surge in SLP and AXS tokens, NFTs are stepping into the spotlight. While the market trades indecisively, AXS has surged, hitting a new all-time high each day, with Animoca Brands’ chairman stating that NFTs will “affect the way that we will work, live, and play.”

Concerns about a dying bubble resurfaced as the NFT market lost 90% of its transaction value after its May all-time high. Highly priced NFTs did account for the total value, however a non-fungible report highlighted a decrease in high price NFTs, but an increase in lower priced NFTs, which may have been Axies.