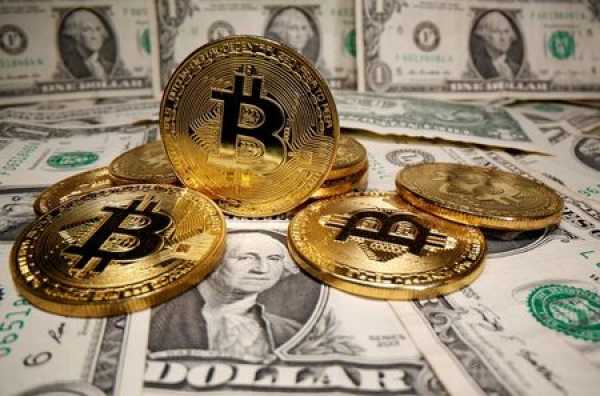 Using the Elliott Waves (EWP), see Figure 1 below, I view Bitcoin (BTC) as completing the green (minor) wave-5 of red (intermediate) wave-c of black (major) wave-4. Since Elliott waves are fractal, BTC is currently wrapping up even smaller waves (grey minute waves-iii, iv, and v), with the ideal Fibonacci-based target zone shown for each, respectively.

Bitcoin should bottom soon and then rally to at least $50K, ideally new all-time highs.

As you can see, BTC has been chopping around since its mid-May low, in what is called a triangle in EWP terms. Once the triangle completes, which from a technical analyses perspective is called a Bear flag, the price will break down and travel south about equal in length to the triangle’s width: small red dotted down arrow.

That then targets right into the ideal (grey) minute-v target zone, as well as the perfect (green) minor wave-5 target zone: the 176.4 to 200.0% Fibonacci-extension of minor wave-1, measured from the top of wave-2. Note that the mid-May low was minor-3 and bottomed almost precisely at the 161.8% Fib-extension of wave-1. Then green wave-4 initially reached the 100% extension. Picture perfect so far, and thus I must anticipate a picture perfect wave-5 bottom until proven otherwise.

The technical indicators (RSI5, MACD, MFI) set up potential positive divergence (dotted green arrows), which means the currency is moving lower but on less strength, momentum, and money is moving back into Bitcoin. The latter is very important because liquidity drives markets.

When the five waves down complete, a larger irregular flat wave-4 should end, and I anticipate the next multi-month Bull run to $100K +/- 10K to start. Since the financial markets are all about probabilities of possibilities, the alternative (labeled as “alt: III, alt: a, alt: b”) is BTC will “only” rally -in three overlapping waves- to around $50K+/-5K for a bounce and then head south again. Why? Because after five waves down, one must at a minimum expect at least three waves back up.

Bottom line: BTC is IMHO fast approaching a tradeable bottom from where one can expect at least an almost doubling in price, preferably a quadrupling. As usual, I will continue to monitor the price action as we move higher to see which two it will become. I prefer the latter but will gladly also take the former. A doubling is nothing to sniff at.