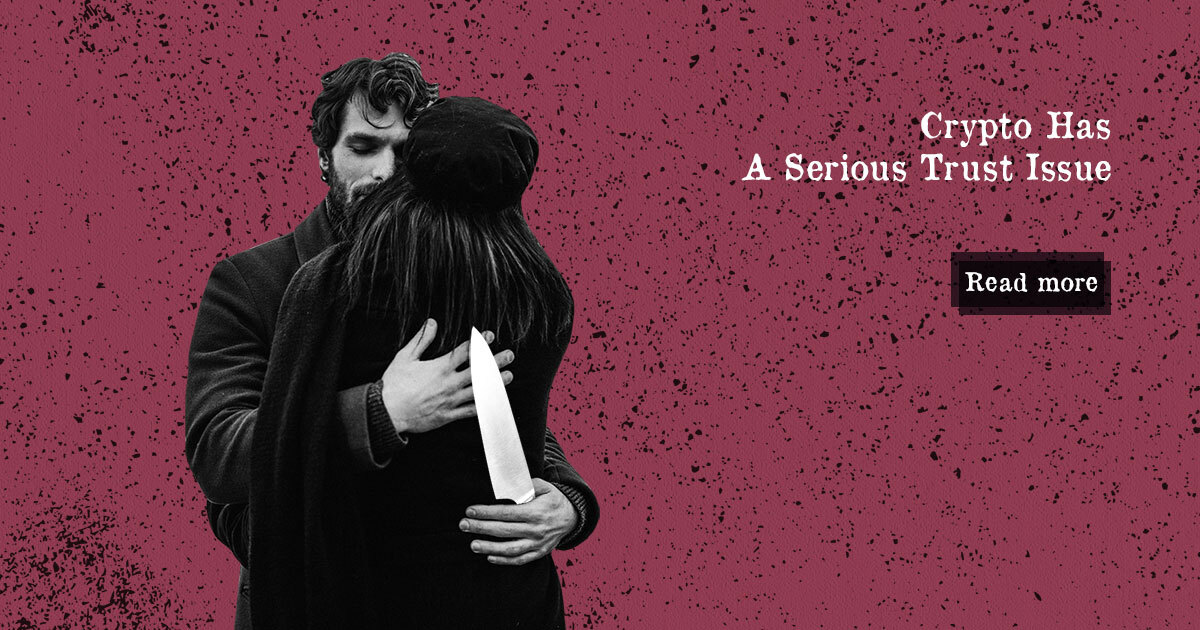 Blockchain has proven not to be immune to illicit activities. One narrative permeated by those who question Bitcoin is that cryptocurrencies have been used on the darknet to facilitate unlawful activities. Despite Bitcoin and cryptocurrencies gathering mainstream attention, and the perception of the assets shifting from frowned upon to bullish, the market still garners a high level of ambivalence.

Trust in the blockchain space is an ephemeral ideal. Although digital interactions on the blockchain are trustless, trust needs to be established at a higher level. Blockchain interactions are indirectly mediated by software developed by individuals. Thus, blockchain users indirectly choose their project based on the level of trust communicated by each company/protocol.

When financial remuneration is at stake, trust can be easily broken by either party. When asked about the threat level associated with crypto investing, Aisha Johnson, director of media relations at the SEC, pointed to Gensler Aspens’ speech which referred to crypto as a ‘wild west’ due to the new asset class being “rife with fraud and scams.” Trust thus involves a human dynamic when negotiating through technological implementations.

The crypto industry’s mishaps, such as hacks, fraud, and scams, are emphasized despite the unregulated space. In a Medium article, Utrum notes that “trust within cryptocurrency is the most valuable currency of all,” because, without trust, the public’s perception at large will become tainted. Unfortunately, crypto has shown its inability to dislodge its bad apples in several instances.

Scams and bad actors are incentivized by the economic mirage of blockchain, as financially unequipped investors blindly invest in new projects promising high financial returns. Moreover, a 2021 study shows that only 16.9% of investors fully understand the technology in the first place, which raises additional concerns around irrational investments which are motivated by psychological incentives such as FOMO, and ultimately greed.

Bitcoin Magazine wrote an article on how crypto promotes financial literacy. On a similar note, a “Technology in Society” paper argues that blockchain reconfigures trust paradigms in society; however, it does not emphasize the costs needed for blockchain to achieve this societal potential. Crypto is setting a precedent for financial inclusion, but at the same time, sidelining those who become exposed to crypto scams, hacks or rug pulls.

A trustless network is the ideological application of every blockchain project; however, the fact that human involvement is necessary to develop those very networks dismantles the notion of trust. Moreover, the fact that crypto is not immune to human entanglement generates additional risks for investors.

Most developing blockchain projects emerge with the same organizational structure and rely on the same development principles as any tech project. Thus, marketing is an essential aspect of a project’s success, overshadowing the true value of the network.

The BitConnect pyramid scheme highlighted trust, which can be obtained by offering high financial yields and generally being charismatic. Even despite the multiple red flags, investors lost large sums of money. The recent Poly Network hack, which saw a hacker steal over $600 million, illustrated how good marketing can undermine software security.

Not all projects seek investor funds to profit without delivering a single working product. Nevertheless, due diligence is an essential element of safely investing in cryptocurrencies and blockchain, much like any other investment endeavor where personal finances are at risk. While the underlying network should be trusted, users need to trust the people behind the product.