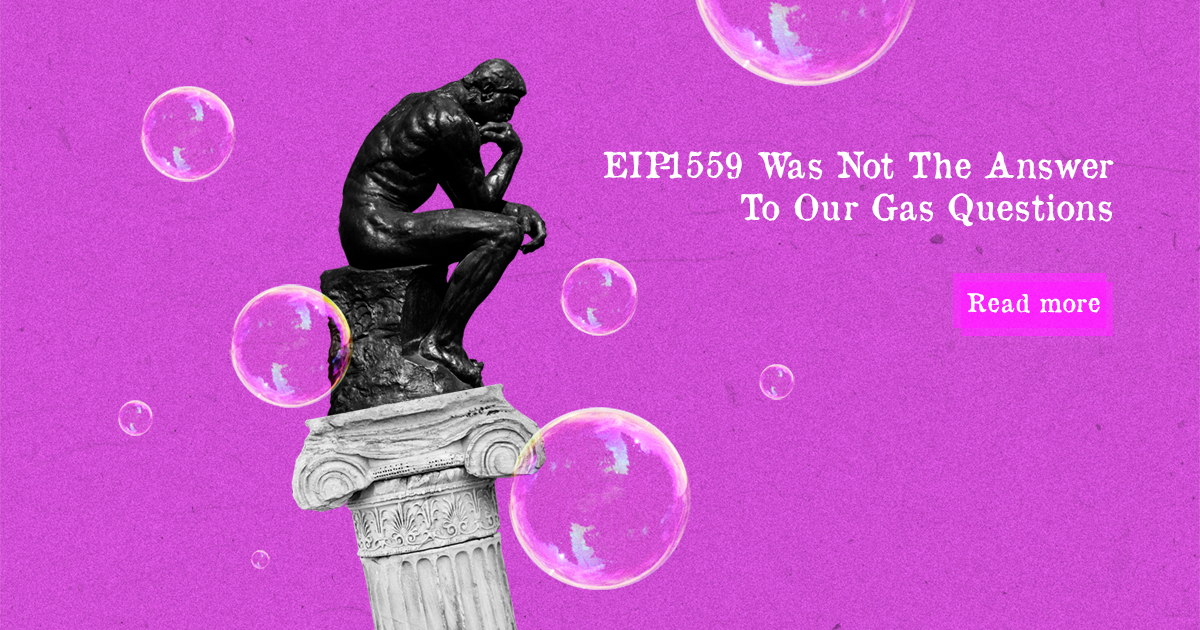 What crypto investors seek in terms of product and usability is available on the market, yet they stick to what seems more reputable. Customers’ behavior tells us that consumers are shaping their habits based on common consensus. Ethereum is widely used and accepted as the best blockchain network, despite constant criticism for excessive transaction fees.

Ethereum’s much anticipated and criticized update, which included EIP-1559, only sought to facilitate a smoother transition to Eth 2.0 while addressing fee predictability. Specifically, the new monetary model reduced fee uncertainty by introducing a “base fee” and a “priority fee.”

The model reshapes the bidding process as miners no longer ask for a premium for faster transactions. Instead, users increase their bid to prioritize transactions on the network. However, CoinDesk reports that transactions are not yet divided to meet the EIP-1559 standard as miners don’t specify a “base and priority fee.” Moreover, Chinese journalist Wu Blockchain notes that base transaction fees reached 155 gwei, “the highest since February 23,” illustrating that Ethereum never considered amending gas fees, only increasing predictability.

Nonetheless, high fees are attributed during pique trading periods. Some reports indicate that base fees have been lost despite failed transactions due to either network congestion or inadequate fees. In contrast, Ethereum has burned over 160,000 ETH since enabling the London update, making an ETH token more valuable due to its scarcity.

Still, as ETH price increases and fees in tokens reach new highs, the fiat to crypto conversion will be detrimental to the network. Even real estate project AQRE Home, which has developed an app to purchase a home through crypto, stated it would shift its development from Ethereum due to the high fees.

NFT is the new trend. The scarcity and hype generated by enclosed communities started a gas war. However, with EIP-1559 decreasing fee uncertainty, it retained an essential element that gives miners similar financial rewards, precisely, “priority fees.” During an NFT release, users want to be the first to purchase a collectible, increasing the “priority fee” and creating a network effect, as more users referee miner’s fees.

Chris Hamer argued that whales are rarely affected, as they are willing to spend a higher premium and secure an NFT, which eventually pays off their investment. However, there are records of fees that increased to 2000 or 3000 GEWI, which ultimately affect anyone who wants to utilize the network. In a Tweet, rvdeeb shared an image showing priority fees reached more than 7000 GWEI as investors sought to participate in the NFT battle.

OpenSea, Etheruem’s prime NFT marketplace, is responsible for 20% of gas consumption, as the platform posted transactions worth $3 billion in August alone. Additionally, following the pre-sale release of “The Sevens,” gas fees spiked by 300% on September 7, a number previously recorded only during the DeFi 2021 spring boom.

But NFTs are not the sole catalyzing factor that affects gas prices. For example, the most recent market turmoil, which saw over $2.5 billion in trading positions, liquidated increased Uniswap and Opensea transactions as investors sought to exit their spot position and prevent further portfolio damage.

Layer 2 solutions are becoming increasingly popular. However, their active network is not thoroughly reflected in their price action, as the market continues to extend its volatility. Evan van Ness noted in a Tweet that “there are more transactions on Ethereum’s layer two than on Bitcoin.” While that shows a better performance than Bitcoin, it also shows how Layer 2 protocols can directly challenge Ethereum.

EIP-1559 and the London hard fork are elements needed to reach serenity, but innovation does not wait for anyone. Solana’s expansion into the space increases its market exposure, exposing users to a network that meets their demands, despite being a new addition to the space. Even Peter Schiff argued that technology and innovation are rapidly changing, and Ethereum might be losing ground if further delays are added.

High network fees are attributed to high network demand. Ethereum’s fix was never intended to lower its fees yet. As the NFT hype will diminish in the coming months, fees on the network may normalize. However, if Ethereum becomes an integral part of our digital interactions, fees will be the same, if not even higher.