ہوم Coins Altcoin News Grand Theft Auto: Trilogy Released, but Where Can We Get GTA with... 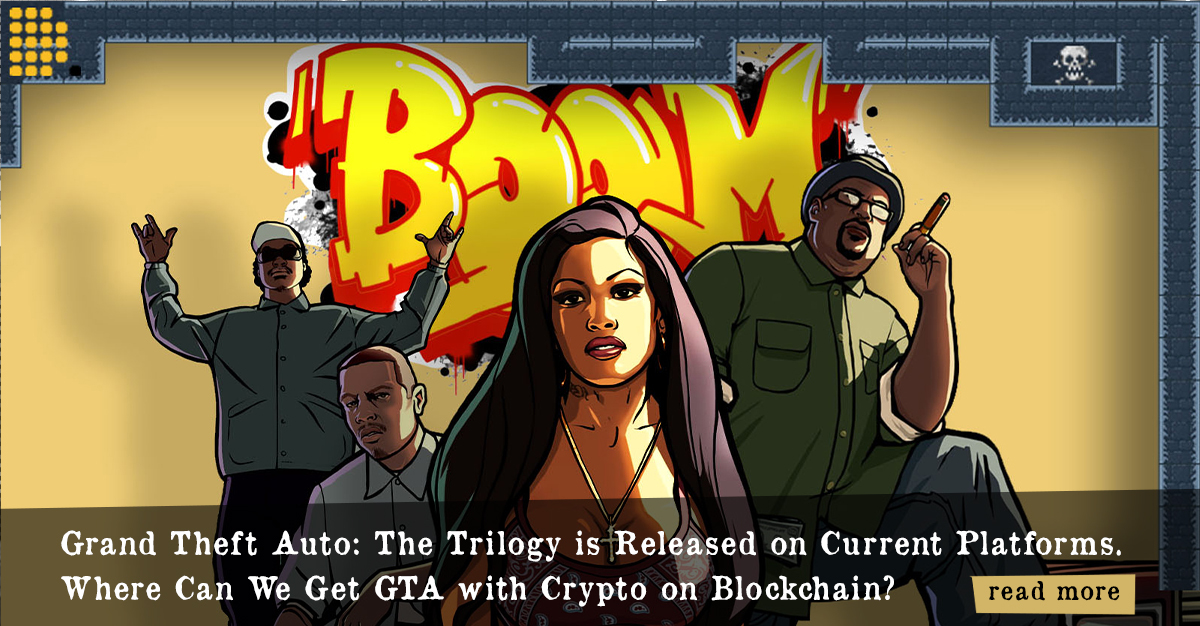 Grand Theft Auto is one of the all-time great games. Indeed, GTA IV takes third place and GTA V takes fifth place among all games ever released, according to Metacritic. Moreover, the developers, Rockstar Games, established the entire genre of open-world games. Undoubtedly, GTA has become one of the pillars of video game culture.

The game’s evolution passed from 2D with a top-down view into an entire world full of events and life. Moreover, GTA Online raised the concept to a new level. It feels almost like a metaverse, because it has its own in-game economy and so on. However, the fact that it doesn’t have one common server where all the players can play and an economy based on blockchain technology makes it less similar to Decentraland or The Sandbox.

A month ago, the fans of the series got some good news. On the one hand, everybody expected at least some information about the upcoming and much-anticipated Grand Theft Auto 6. On the other hand, it’s a new game from Rockstar Games, even though it’s a remaster! This company never disappoints its fans.

The game is a compilation of classic 3D Grand Theft Auto games. The collection includes GTA III, GTA Vice City, and GTA San Andreas. As the graphics were the most outdated part of these games so far, they are what has changed the most. Some users liked the new visual style while others claimed that it became too cartoonish, especially in comparison to GTA V.

On the gameplay side, the changes were minor because why would you go and change something that’s working well? GTA gameplay has stood the test of time and has already become a classic. On the other hand, the developers advanced gunplay and targeting controls as well as updated the mini-map and audio station selection. Thus, the controls became similar to what we have now in GTA V. Moreover, the players got the ability to immediately restart a failed mission, which didn’t exist in the classic Grand Theft Auto games.

One of the biggest acquisitions for fans of the series became the version for Nintendo Switch. The last GTA on Nintendo’s consoles was Grand Theft Auto: Chinatown Wars on Nintendo DS, a tribute to the first top-down parts of the series. Although Nintendo fans have two parts of Saints Row, a GTA-inspired open-world game, they can finally visit the original San Andreas, Vice City, and Liberty City on the go!

Let’s admit, Polka City itself is a bold move! The developers were enthusiastic and brave enough to challenge themselves with the creation of a big GTA-ish game but within the crypto metaverse, like Decentraland or The Sandbox.

Of course, the game’s visuals leave much to be desired. Now, it looks more like the Gangstar series from Gameloft on Android/iOS mobile platforms. However, the mechanics and the world’s fulfilment are developed quickly with giant strides.

The in-game world is generated containing a lot of economy items like NFTs such as land pieces, airports, shops, vehicles, aircraft, and even pets! This means that players literally own every object. They exist not only in the game, but in users’ crypto wallets. Thus, developers do not control users’ property. Even if the game is deleted, the items still belong to users, and users can sell them on any marketplace.

Furthermore, the owners can get dividends from the other players using their property or services. This is the real economy interaction within the metaverse.

On the other hand, gameplay is the first thing that needs improvement. So far, the open-world feels a little bit empty. Logically enough, numbers will rise as more people play the game. As it’s a decentralized metaverse game, people themselves decide how to fulfill the in-game world. Consider it a democratic approach in the gaming industry. Moreover, the basis for in-game economy seems to be solid. The developers are building an entire ecosystem within the metaverse.

The second thing that needs to be improved is the visuals. A modern game for PC cannot look like a mobile game. At least not if the developers want the players to enjoy playing.

So far, the game is very promising even despite the major problems I mentioned above.

Indeed, games exist because of the fact that people cannot try some things in real life. Grand Theft Auto is technically the gangster simulator, while Polka City still doesn’t show such gameplay mechanics.

So we will see how the concept is going to work. Maybe the players will take charge and go a different direction than the developers imagine now. Moreover, the developers may just want to create a sandbox with a well-working economy, and players will shape the gameplay later.