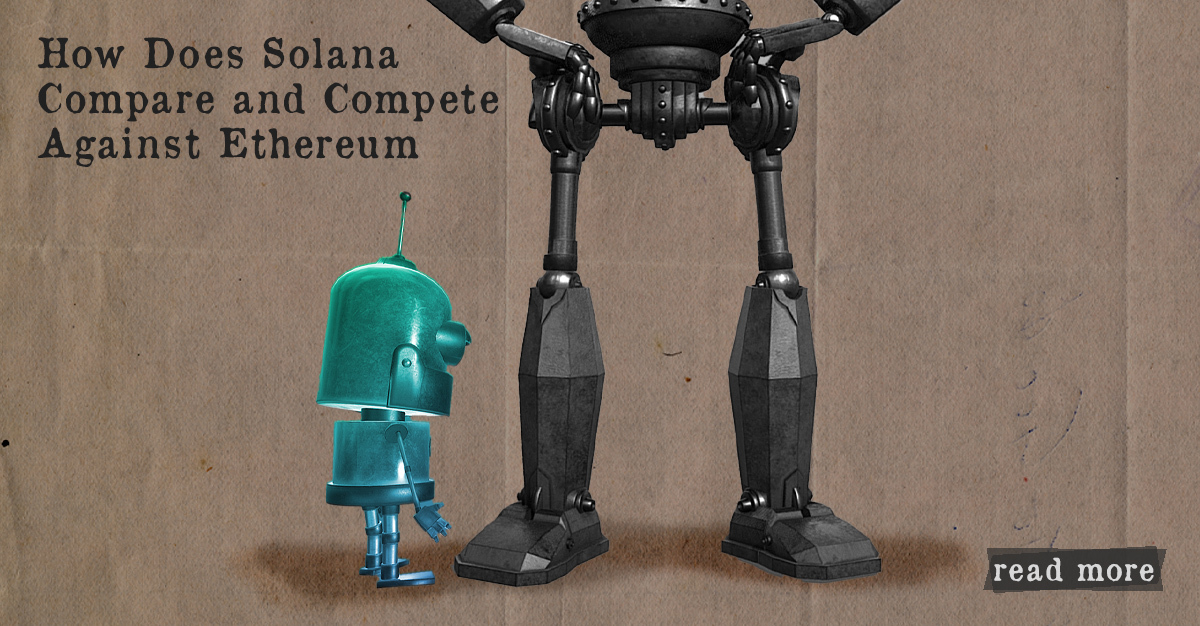 Ethereum is the second-largest cryptocurrency in market cap. It has made a name for itself in the crypto circles thanks to its numerous functionalities, which go beyond the conventional cryptos utilities such as a means of payment and store of value. One of the Ethereum utilities that stands out is providing developers with a platform to create Decentralized apps (DApps) and smart contracts.

But these functionalities are not confined to the Ethereum network. Solana has the same utilities. In fact, it enables developers to create Dapps and smart contracts at a faster rate and cheaper cost. It is not surprising that Solana has joined Cardano in the league of “Ethereum killers”.  What this term means is that Solana could eventually overtake Ethereum and replace it altogether. But how likely is this scenario?

Well, comparing these two programmable blockchains can give us a clear picture.

2021 is a good year for crypto traders. The market has generally been bullish, and Ethereum and Solana have not been left behind.  Ethereum grew four folds from $1000 at the beginning of the year to $4000. While the Solana trend is also bullish, its growth has been astronomical. Solana has grown from $2 to over $200 over the same period and yet SOL is forecasted to increase in value in the upcoming years. This shows the cryptocurrency has massive demand in the market.

Solana has received massive support from top crypto investors, including Andreessen Horowitz, Polychain, and Alameda Research. In June, it raised $314 million secured funding by selling private tokens. These funds have played a pivotal role in legitimizing and enhancing the blockchain platform.

In addition, the FXT crypto exchange has launched numerous Solana-based projects. One of the projects that stand out is Serum. This fully decentralized dex and defi ecosystem will help investors to trade crypto coins directly between different blockchains.

Solana has held a series of Hackathons that bring new ideas and innovative solutions which go a long way to enhance the system. The blockchain is holding its fourth hackathon named Ignition. The hackathon will provide developers with a chance to share ideas, connect and compete for prize money worth $5 million.

3. Strong Presence In The NFT  Market

The sale of NFTs is the greatest driver of Solana’s success. A few weeks ago, a million-dollar NFT was sold on the platform. The network also made history after selling 10000 Degenerate apes in eight minutes. In September, Solana sold the first million-dollar NFT. It is this massive value gain that attracted the attention of cryptocurrency investors.

How Solana Compares With Ethereum

1. Solana is significantly Cheaper than Ethereum

According to Solana.com, the transaction fees average $0.00025, which is far much less than both Ethereum and Cardano. These low fees have attracted many Dapps developers on the blockchain network. On the other hand, processing a transaction on Ethereum can cost as much as $70. In fact, one user reportedly paid shockingly high gas fees of 23 ETH (roughly $9000) on Uniswap for $120 transactions. The high fees on Ethereum are due to scalability issues.

The secret behind this ability to process many transactions is using the proof of history consensus mechanism. This mechanism helps to track hashes chronologically and verify the period between two events. In essence, it helps verify the transactions without waiting for the full block to be filled. Therefore, more transactions are processed in a short time, enhancing efficiency.

In addition, Solana uses a Turbine protocol to break down data into smaller packets easing the verification process and boosting processing speed. Ethereum is also aiming to roll out a similar feature which will be referred to as sharding.

Solana also uses the proof of stake (PoS) mining method, which is more eco-friendly than Ethereum’s proof of work (PoW). But Ethereum is also set to upgrade its network from proof of work to proof of stake. PoW mining processes require massive computational power and produce harsh emissions in the environment. However, Ethereum is planning to migrate to PoS through the upcoming upgrade.

Currently, Ethereum is the leading blockchain platform for developing DApps. Developers endear Ethereum due to ERC 20 and ERC 721 tokens standards which enable interoperability between different apps.

Solana has forced its way into the top 10 cryptocurrencies in the world. It has really gained while most of the cryptocurrencies were shedding their value in the market.  While other cryptos, including Ethereum, have increased their value, Solana’s growth has been extraordinary.

Solana has powerful technical specs, which have accelerated its fast-paced growth momentum. It is designed to keep pace with tech development using future-proof scalability abilities. For example, it can match an ever-increasing computer’s processing speed.

It kept gaining value when most cryptos, including Ethereum, were falling. It is one of the assets that investors should consider as a strong buy. Also, more developers are switching to using Solana. In fact, the cryptocurrency has massive potential to match the market cap of Ethereum.

One of the disadvantages of Ethereum is network congestion due to high volume. However, Its high fees and slower transactions have stopped it from being the second-largest crypto. Here is the good news. Ethereum upgrade will come with cheaper fees and up to 100000 TPS.  This will enable it to compete with Solana and other Ethereum killers. Eventually, Solana and Ethreum will coexist with varying success.

Regardless of whether you are a crypto investor or enthusiast, you should keep an eye on the market performance of Solana. While it is a relatively new entrant in the market, it has shown the great potential of eventually overtaking Ethereum and Cardano to become the leader in the crypto world.

Regardless of whether you are a crypto investor or enthusiast, you should keep an eye on the market performance of Solana. While it is a relatively new entrant in the market, it has shown the great potential of eventually overtaking Ethereum and Cardano to become the leader in the crypto world.