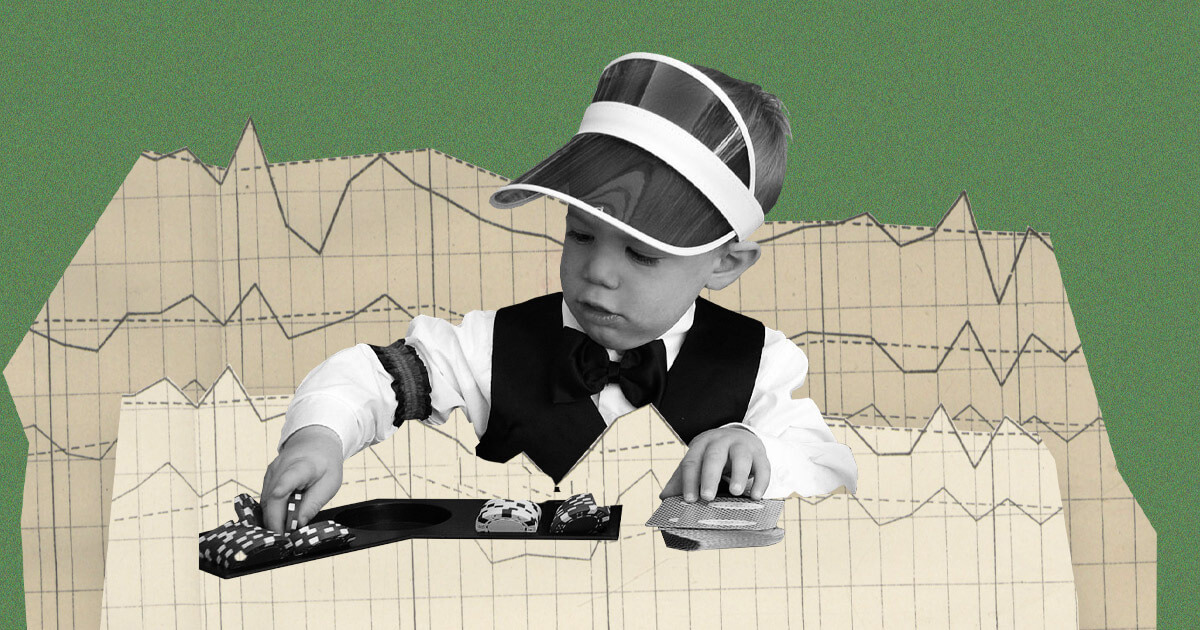 Imagine this. You open your Binance or Coinbase exchange, buy some coins, close the app and then… A sleepless night, shivers, constant checking of your screen – is it up yet? Did it grow? You wake up in the morning feeling something that could only be called a hangover – if alcohol was involved. But you weren’t drinking.

What is this feeling and this behavior? Is it normal to feel like this, to act like this? Do all traders feel like that when they invest their money into something they have no control over? Could this behavior become a problem as big as alcoholism? Or – because a great amount of financial betting is involved in currency exchange –  is this gambling?

So many questions, but the answer is not necessarily easy to find. We tried looking into the roots of the issue.

Gambling involves staking on the occurrence of an event that has an uncertain outcome for winning. For an action to be considered as gambling, three prerequisites must be present; the stake, the risk involved and the prize to be obtained upon the occurrence of the event.

Gambling has existed since records began. Early gambling involved six-sided die in Mesopotamia in 3000 BC. Around the 9th century, playing cards made their entrance, giving birth to the modern card games we know today. Over the years, gambling has taken several shapes and forms such as sports betting, parimutuel betting, and the gamut of casino bets.

Trading on the other hand, involves the buying and selling of financial instruments like cryptocurrencies, stocks, bonds, derivatives amongst others. There are several types of trading such as high-frequency trading, day trading, etc. each of which has its pros and cons.

Historically, the trading of financial instruments began in the 17th century after merchants banded together to form joint-stock companies. In 1602, the Dutch East India Co. issued the first recorded paper shares, allowing for the trading of stocks. This revolutionary concept spread through the world, leading to the creation of exchanges such as the London Stock Exchange which was founded in 1773.

Similarities Between the Concepts – The Odds

Clearly there are core similarities between the concepts of gambling and trading. A key similarity between them has to do with the underlying psychological patterns of the two concepts.

The role of odds in gambling and trading cannot be over-emphasized. Odds are a means of calculating the likelihood of a particular outcome. For gamblers and traders, every decision is based on the probability of an event occurring – this plays a central role in their choices.

Every gambler has to consider the odds placed in front of him before making his choice; the higher the odds, the more unlikely the occurrence of a certain outcome is. Conversely, the lower the odds the more likely an event is to occur.

Odds are also indicative of the reward that is accruable to gamblers and traders. The higher the odds, the larger the reward, whereas lower odds generally translate to a lesser reward.

Since it has been established that odds are an integral element of both concepts, it is often in the best interest of gamblers and traders to get favourable odds before entering a trade or placing a bet.

To tilt the odds in your favour as a trader, it is advised that you should enter fewer trades with higher probabilities while veteran gamblers advise playing games that will give you an edge over the house (the person or organization setting the odds).  Traders and gamblers should imbibe the virtue of discipline, sticking to the strategy, and knowing when to cut losses.

Differences Between Trading and Gambling

Despite the similarities between trading and gambling, there exist some marked differences between the concepts. Most profound is the fact that gambling automatically creates a negative expected value. This means that in the long term, the casino or bookmaker (the house) will always win in the end even though they may lose some games. This scenario is termed as the negative expected value.

Gamblers often exhibit cognitive biases and can prevent them from thinking rationally. Most notably the optimism bias posits that gamblers will overestimate the probability of an event occurring. Furthermore, gamblers also exhibit a reluctance bias that may  elicit a hesitancy to bet against desired outcomes.

The reluctance to bet against desired outcomes transcends the odds and hinges on the gamblers’ preferences, for instance, making bets that support the success of their preferred teams.

Gamblers are also guilty of positive recency bias, aka the Monte Carlo fallacy. This bias states that if an event happens more frequently than expected, it is less likely to happen. This fallacy is best illustrated by the Monte Carlo incident of 1913 which it was named after. In that incident, the roulette wheel’s ball had fallen on black several times in a row. As a result, gambler’s believed that it would fall on red soon. This made them start pushing their chips, betting that the ball would fall in a red square on the next roulette wheel turn.The ball kept falling on the black until after 27 turns, by then, millions of dollars had been lost by the gamblers.

Other psychological biases associated with gambling include the preference for likely outcomes and a ratio bias which sees gamblers choose bad odds if they are drawn from a large sample.

Gamble-Trading: Are You Gambling Instead of Trading?

However, some tell-tale signs can indicate if an individual is gambling instead of trading. Firstly, entering into trades because there is a lot of buzz from the public about an asset in-the-moment may be an indicator, especially if the trader fails to make an informed decision.

Another indicator of gamle-trading, is when trades are made solely for the emotional high, without rationalizing decisions. Entering a trade with the sole intention of always winning may be a sign of gambling. The intention to always ‘win’ every trade may be counterintuitive for the trader as it clouds their judgment, making them hold on to losing positions. Making losses in some trades is part of a good trading strategy if pertinent lessons are learned and the amount lost is kept at a minimum.

Another indication that a trader may be gamble-trading is a failure to pay attention to fundamentals and technical analysis. Instead, the gamble-trader commits typical fallacies associated with gamblers. Some traders go on to commit the Monte Carlo fallacy while others let their personal preferences of a stock or cryptocurrency dictate their trading over the technical and fundamental analyses.

Gamble-Trading: Are You Gambling Instead of Trading?

It is a fact that if traders gamble, it would irretrievably lead to losses. One trading sector that has seen a spike in traders gambling instead of rational trading is the cryptocurrency sector. This leads to a crisis of cryptocurrency gambling addiction that costs traders a fortune. According to experts, this phenomenon has been described as the “crack cocaine of gambling” given the ease of accessibility and the fact that the market is open 24/7.

Furthermore, the low barrier of entry makes it easy for individuals to get into the market and the extremely volatile nature of crypto markets further complicates things.

According to Tony Marini, the lead counsellor of cryptocurrency addiction at Castle Craig Hospital in Peebles, it is impossible to ascertain the true figures of persons that have been affected by cryptocurrency gambling addiction.

Marini noted that while everyone is talking about their winnings in cryptocurrencies “we are not hearing from the people that are losing money.”

While gambling and trading may pass as being two peas in a pod, they have distinctions that set them apart from one another.

If, as a trader, you are notching significant losses, it could be that you are gamble-trading. The ignorance of fundamental and technical analyses and the arbitrary trading in assets because of public buzz are key indicators of gamle-trading. A keen eye should be kept on the biases that are usually inherent in gamblers.