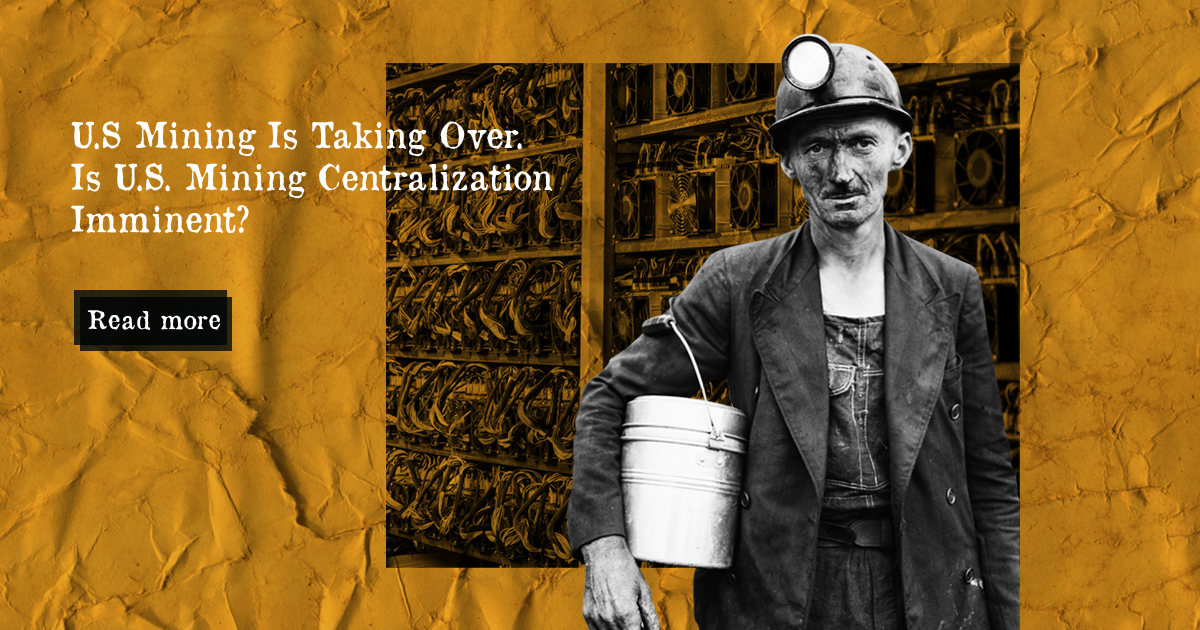 Bitcoin mining has been forced to adopt a new dynamic with Chinese government hegemony dismantling native mining. Miners have been forced to decamp, seeking alternative locales to continue to power the network. Previous concerns of Chinese hashrate centralization are now obsolete, with hashrate scattering across the planet. With that in mind, the U.S. strives for global hashrate ascendency.

Mining Culture in the U.S.

Western cryptocurrency leaders and influencers took it upon themselves to alleviate some of the global mining concerns, circumventing public space by founding the Bitcoin Mining Council (BMC). What’s striking is that primarily North American entities launched the BMC, some labelling it as a P.R. move to incentivize reverse negative media attention.

Interestingly, the Daily Dive podcast demonstrated that North American miners are the only business entities benefiting from the Chinese mining exodus. This is primarily due to the growing hashrate allocated to U.S. firms, reflected in their quarterly earnings reports. Interestingly, three of the Bitcoin Mining Council founding members reported more BTC was mined in Q2 than in the quarter prior, with Riot Blockchain mining 676 BTC compared to 491 BTC.

The Relocation to the U.S.

Miner’s Bitcoin mining exodus coincided with Bitcoin’s sharp decline. Nic Carter and other media sources reported increased miners selling activities to guarantee their relocation, which catalyzed the price of BTC towards the $30,000 mark. However, Glassnode and Cryptoquant data showed dissimilar results, with Lex Moskowski noting all May’s end selling pressure “was completely on us.”

Still, the U.S. is a significant location for mining endeavors because of its favorable political climate, stable economy, and lower energy costs, paramount to miners’ decisions. Moreover, a stable regulatory outlook on crypto makes mining a “real pleasure” as businesses are more open to U.S. mining. The Bitcoin Mining Council reports that BTC could be using 56% renewable energy, which compared to Kazakhstan’s 90% resilience on fossil-fueled energy makes the U.S. a green mining and financial oasis.

There Are Locale Alternatives

The U.S is not the only alternative for miners. Foundry’s Kevin Zhang highlighted that miners are looking for places in “Central Asia, Eastern Europe, and North America” to relocate. Moreover, according to their statement, ASIC producer BITMAIN offered assistance for miners to relocate outside China and continue operations.

However, the profit-driven ethos of miners secludes decentralization and commuting it in the backdrop. Thus, if one country can suffice the low costs of mining to incentivize miner’s profits, that will be the country of choice.

Central Asia, Latin America, and Europe are becoming North American mining contenders, with some mining processes already underway in such places, with 25% hashrate allocated in Central Asian countries like Kazakhstan or Russia, 15% in Latin America, and 10% in Europe, according to Nick Hansen, CEO of Luxor mining firm. To that end, mining centralization will be enforced only by regulators and crypto-friendly/unfriendly laws, which will force miners to concentrate in a single locale.

A new harsh regulatory standoff and exodus could affect the price of Bitcoin and the entire market if miners were forced to relocate outside their area. This could be a big buying signal because history shows mining and BTC’s price recovered.