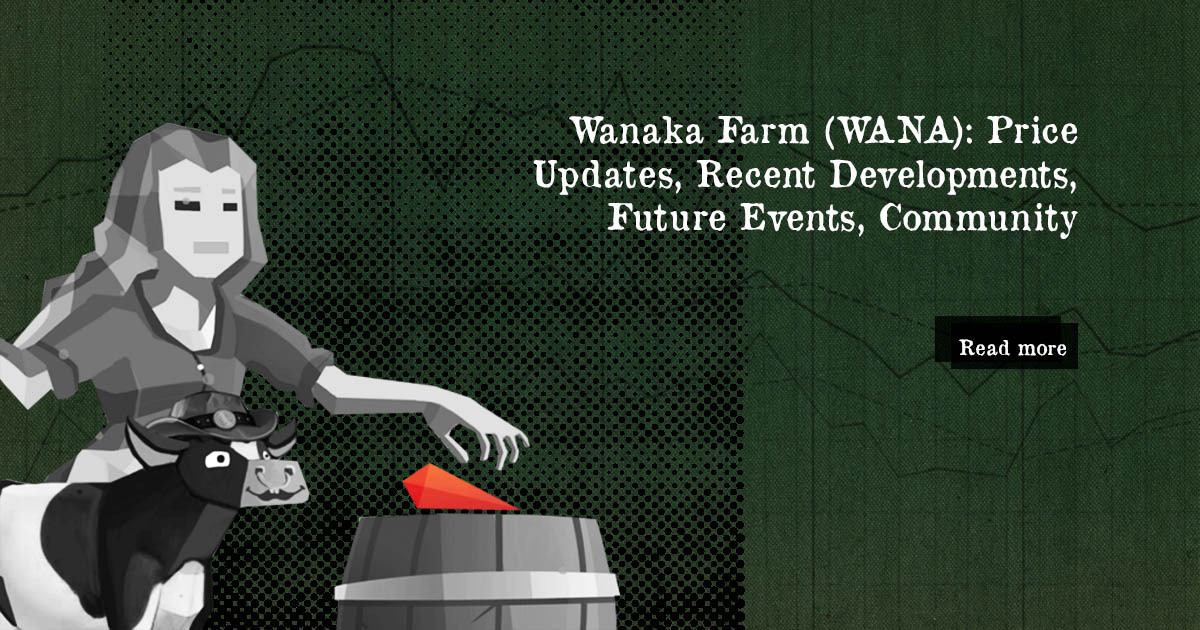 Wanaka Farm is an emerging blockchain-based game platform that has been in the news for many reasons. Since its launch in August, Wanaka Farm has yielded an ROI of 70x, making it the third-best performing crypto in the same period.

Wanaka Farm markets itself as a unique NFT blockchain-based game. In Wanaka Farm, people can own their virtual lands and other NFT items to plant, grow, and harvest to earn their crypto. So, how has the project fared in its short time on the crypto market?

Wanaka Farm entered the crypto space with a bang, breaking its all-time high just four days after its listing. In the last month, Wanaka has announced three initial DEX (decentralized exchange) offerings (or IDO) on Poolz, Duckstarter, and Oxbull.Tech.

The project has also entered several strategic partnerships in the same period. To achieve VR/AR tech on the Wanaka Farm platform, the project has partnered with Blockchain Ape.

Even in addition to the launch of staking on the network, there are still many events planned for Wanaka Farm in September. One of the most anticipated events on the network is staking.

After that, there will be a beta test of the Wanaka Farm game in the second half of September. The project announced that it would select a group of players who have completed their form to test the game’s beta version.

Also on the list of events, the Wanaka Farm game will be going live in September if the beta test is approved. Players will need around $200 in $WANA tokens to start the game. In addition, land sales are expected to take place in the second half of September.

As earlier mentioned, Wanaka Farm has been one of the top-performing crypto projects from August to date. In addition, the return on investment on WANA, the native token of Wanaka Farm, stands above 70x.

Even after the crash that shook the crypto market, WANA emerged as the leader of the market recovery among blockchain gaming platforms. On September 8th, @PlayToEarnGames Tweeted;

Although a new project, Wanaka Farm has amassed massive support from its community members. The DailyCoin team found Wanaka Farmers to be great believers in the project. One user, Hendar Suherman, wrote about Wanaka Farm;

This is excellent project for the future with strong team, a transparent, planned and project roadmap. it will be successfulI. Always be waiting for the progress of this project. To the moon

Unlike other projects, Wanaka Farm is also very involved with its community members. For example, when the project launched smart contracts on the network, some of its members mistakenly sent their assets to the smart contract address of Wanaka Farm.

Since the project had already deployed its smart contract, it was impossible to retrieve assets in thousands of dollars. However, after an outcry from some of the people who were affected on September 4th, Wanaka Farm announced a 30% airdrop of the lost assets in $WANA tokens to its community.

A Twitter user, @shizuka699, identified himself as one of the people affected by the incident. After the announcement, @shizuka699 wrote;

Thank you very much. I’m one of them. Thank you again. I will continue to support you. When will I post it?

Wanaka Farm is an emerging project with a lot of prospects, and has achieved 70x ROI after just one month of its launch. The project also has a dedicated team that has put in a lot of effort to ensure that the community members feel like a part of the project. This can be seen in its refund of lost assets during its smart contract launch.