ہوم Prices What If Crypto Never Gets Widely Adopted? — DailyCoin 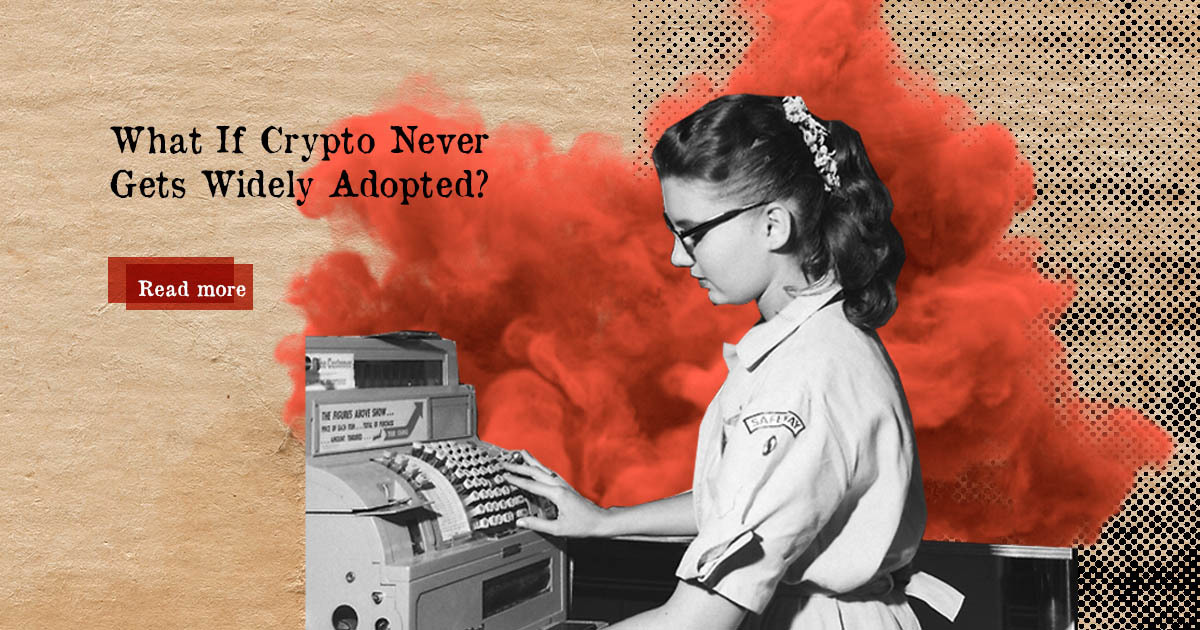 “Too big to fail” is a theory about the stability of our financial system. Bitcoin and the crypto market affirm a similar flair about their aptitude to transform society and their financial habits from within. However, the fundamental beliefs of crypto maximalists have been defied by economists challenging the very nature of crypto’s success – mass adoption. Can crypto even contend centralized financial markets if mass adoption is not instated?

Adopting new technologies on a larger scale does not rely on offering them as an alternative. For example,Bitcoin was introduced as a form of payment but it ultimately failed to gain traction. In Arnhem Bitcoin City, many businesses allow Bitcoin payments, yet people are not spending any.

A technology as “disruptive” as Bitcoin does not attack business models; instead, it restructures the economic and financial playing field. A Harvard Business Review piece notes that as a “foundational technology,” cryptocurrencies will have an “enormous” impact on the economic and social systems. Still, it can take “decades” for the systems to be integrated into our behavioral structure.

The authors argue that it took “30 years for TCP/IP to move through all the phases” and restructure the global economy. However, access to large information flows is detrimental to crypto’s adoption and market acceptance process because media reshapes an individual’s attitude towards cryptocurrency, ultimately influencing regulators’ activity.

Crypto’s atypical market behavior made Paul Krugman, economist and Nobel prize winner, argue that cryptocurrencies need to make a global usability statement or “give up as a nonstarter,” claiming that despite its allure they are not becoming embedded into the “fabric of society.”

Cryptocurrencies are not yet integrated as a financial standard because their fundamental value contradicts any economic model, which could spell disaster for the Global Economy. Bitcoin started as a response to financial uncertainty to regain control over one’s financial assurance, yet it failed to be operational as a currency. Because of its heightened volatility, Bitcoin remodeled into a store of value.

Although in 2021 Bitcoin is not entirely representative of the cryptocurrency market, Oliver Renick noted that if Bitcoin fails, it’s a “giant red flag to all other risk assets,” which could spell the demise of over 10,000 cryptocurrencies. Nonetheless, while crypto can become invalidated by the global market, blockchain can still hold value in a permissioned and even permissionless format.

Why It Could Ultimately Fail

Several arguments can be attributed to crypto’s market denial. Primarily, the market can fail because of the industry’s erosion from within, as it raises regulatory red flags. In addition, scams, the get-rich-quick cult-like following of crypto communities, and market manipulation are negative indicators for regulators and individual market participants.

However, ‘it will bounce back stronger’ is a prevailing industry discourse after every major price slide. Alex de Vries, a Dutch economist, said Bitcoin’s only current benefit is “hoping the value goes up, and someone pays you more than you paid,” showing Bitcoin is losing traction as a functional asset, aside from a store of value.

If crypto becomes sidelined because of governmental indecisions and incongruences with the current financial model, crypto will perform bilateral financial transactions within an enclosed community. Privacy coins and other utility tokens will still be accepted and utilized; however, institutional investors who have driven up crypto’s market worth will subside. As a result, crypto will never become a financial instrument to challenge and unlock new economic value. Instead, it will persist as a speculative asset.