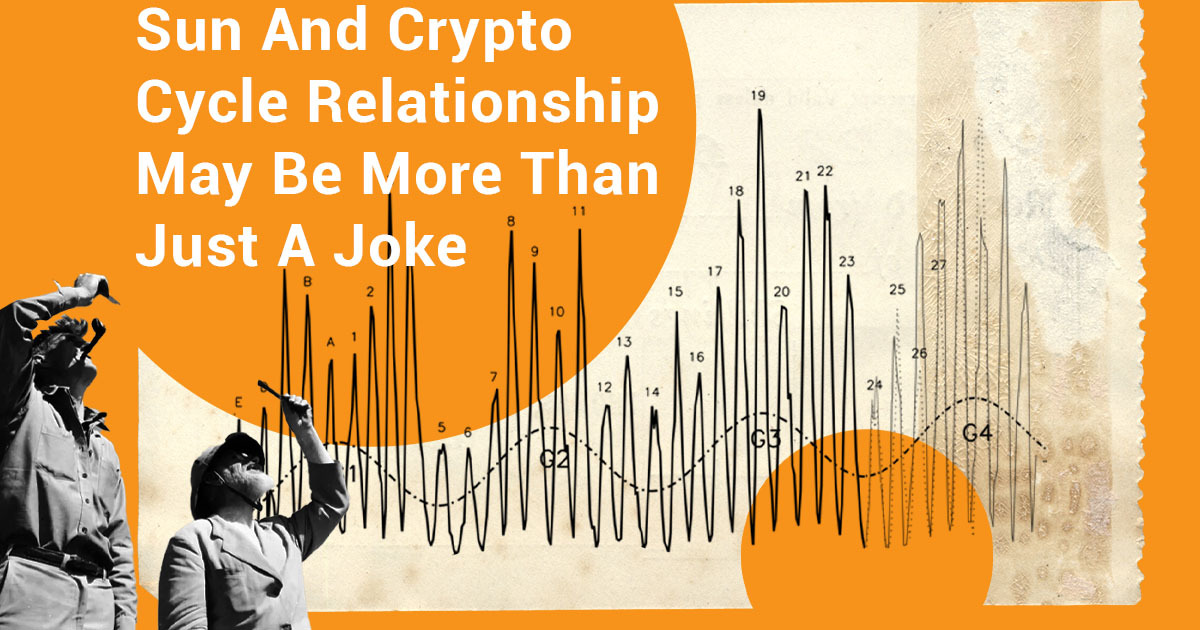 In a Bitcoinlist article titled “Astro Crypto,” the authors point to evidence that astrological events might affect cash flow in the stock and crypto markets. Trading is carried out by humans who, by their nature, are highly susceptible to emotions as various price declines or increases affect their judgment. Identifying a correlation between the Sun’s phases and the amount of energy it exudes could point to a shallow correlation that is not yet theoretically defined.

Is There a Solar Influence on the Stock or Crypto Market?

The author argues that a long-awaited market peak is near as the Sun’s activity starts to emanate a response. Adding to that, he denotes the moon phases “show an almost immediate correlation” with the price of Bitcoin and other stock markets.

Charting price activity in VIX shows a correlation between solar cycles and a macro market movement, entailing that we are nearing the 10.3-year sun cycle and therefore approaching a top. The author argues:

Additionally, other sources indicate similarities stating that market movements “correlate pretty well with the sunspot activity.” What’s striking is that Bitcoin is showing similar signs of sun correlation, and as the author argues, it is mainly due to our emotionally driven nature. Thus, any stellar activity impacting our behavior is, in turn, affecting the stock market.

Market behaviors have been researched previously, and a contingency of climate effect was discovered. A recent study on “Sunspots and stock markets” indicates an “empirical correlation,” highlighting stock activity relationship to sunspot activity. Adding to the research finding, a case study of an Irish trader reinforces the existing findings. Her sunspot trading hypothesis resulted in a 210% increase beating “the performance of the Standard and Poors 500” over 13 years.

Hence, sunspots have a consequence on the market indices as it influences traders’ states of mind. A Forbes article highlights how weather variations have “noticeable impacts on market performance.” Furthermore, neuromarketing research shows why we feel down on cloudy days and that “sunshine is strongly significantly correlated with stock returns.” In that regard, human emotions are highly impacted by the outside environment, especially the forecasted weather.

Solar activity also impacts adjacent elements of the financial market as the “sun spews off far more highly energized particles through space” that affect our hardware. For example, according to Tony Spilotro, Deutsche Bank stated sun flares could have a damaging impact on the communication system. In addition, if such solar energies affect hardware, digital currencies and mining equipment are at risk given that they are highly susceptible to energy deviations.

A Spurious Correlation of Coincidence

By definition, a spurious correlation is a connection between two variables that at first sight appears to share a causal link, when in truth, may be little more than a coincidence. Instead, spurious relationships are caused by a third intervening factor that is not apparent during the initial examination.

The case of solar activity can be argued that the third deciding factor of the relationship between market prices and sun cycle activity is human emotion. However, while it is argued that emotions move markets aside from supply and demand, it is not yet highlighted how impactful astrological behavioral swings are.